Posted on February 7, 2014 by TWPmaverickspring 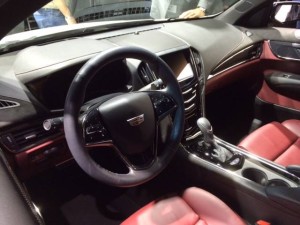 Photo inside one of the revamped cars at NAIAS. Photo courtesy of the event’s official Facebook page.

The North American automotive industry has seen its ups and downs. While 2013 was a fantastic year for the big names (15.6 million new passenger cars and light trucks were sold in the U.S. alone), it’s also important to remember we’re only four years removed from the troubles of 2009—but there’s plenty of hope ahead.

This month, the first big industry gathering of 2014 took place: the North American International Auto Show. Running from January 13-26 in Detroit, this year’s NAIAS left us with plenty to talk about. (Which isn’t difficult to do, considering the auto industry spent more than $200 million on this one show, according to reports.)  Because we’re so closely tied and involved with this sector, we wanted to platform some of the biggest stories to arise from the event. It was nearly impossible to narrow down the list, but we’ve chosen five:

1. Launching New Models
As always, the NAIAS is the place major automakers release their latest and greatest models. This year’s crop included the aluminum bodied Ford F-15, the 2014 “Car of the Year” Chevrolet Stingray, and Honda’s Fit.

3. Cutting-Edge Concept Cars
Concept cars are always a popular part of any NAIAS. This year the most talked about seems to be the Toyota’s FT-1. While tech specs for the FT-1 were not released, Toyota did offer a virtual version of the car for video game players.

4. Technology
This year’s NAIAS was filled with of transportation tech—from established companies and startups, which this includes smart phone-enabled controls, additional cameras, and more.

5. Hydrogen Fuel Cells
What was once just a dream is now coming closer to reality, with a nod to Toyota’s hydrogen fuel technology in the concept FCV.

Want more on NAIAS? Follow us on Twitter for the latest updates on innovation from the show and what’s new in the automotive industry.